Life ALWAYS has Other Plans

In Part 1 of this article, I discussed my daughter’s chronic eye infections and my struggles with trying to treat them naturally vs medically.  Once I discovered colloidal silver I was able to stay on top of the infections, as long as I did not get lazy.  Well, of course I got lazy and things went bad quickly.  The chronic eye infections progressively got worse, resulting in two hospitalizations.   We finally opted for tear duct surgery where she had tubes placed into both upper tear ducts for four months.

Once the tubes were removed from Kairi’s eyes, I assumed her eye troubles were finally behind us.  Well, as usual I was wrong because life ALWAYS has other plans.  A lesson I am constantly trying to learn but keep forgetting somehow.

We had been in beautiful Costa Rica for only nine days when a familiar sign started showing its ugly little red head in Kairi’s eye.  After breakfast I noticed her eye was bright red and was tearing a little.  I immediately sprung into action and put a drop of colloidal silver in her eye.

By the afternoon the redness was reduced significantly but it was replaced with something more concerning.  She had red tissue coming out of the corner of her eyelid.  It looked like her tear duct was turned inside out and was dangling from the top corner of her eye.  I worried it was damage from when they pulled the tubes out and I began to freak a little.

Blood clot coming out of her tear duct

It was Sunday and no doctor’s office was open, which only left us with the option of a trip to the ER.  I assessed the situation and determined based on the tearing being clear and her lack of pain or concern for the eye that we could wait until Monday to get to the doctor.  I of course always second guess myself and worried I was making the wrong call.

Blood clot that came out of our daughter’s tear duct

Kairi became bored with the eye investigation and wanted us to leave her alone so she could go dance.  I decided to watch her eye for a little bit before just heading to the ER.  I was honestly relieved at not having to go to the ER because of our limited (or complete lack of) Spanish.  I assumed I would have to hire a translator at the hospital to explain everything to and it would be quite a challenge.  I put the paper towel that contained the red tissue in a Ziploc baggie and put it in the fridge so I could take it with us to an eye doctor the next week.

The doctor’s office, located in downtown San Isidro (Perez), is in a large medical building that houses several medical practices.   Within two minutes of sitting down, the doctor came out to get us himself.  He took us into a large room that was his office and the exam room.  The room housed a beautiful dark wood desk and modern medical equipment.  The doctor spoke a little English which made things much easier on me for explaining things.

I explained Kairi’s eye history and then showed him the tissue that came out of her eye.  He examined her eyes and agreed the tissue was a blood clot from her surgery.   He said the tear ducts look great and by the blood clot coming out on its own it was no longer a concern.  When he started examined Kairi he genuinely seemed smitten with her.  He played games with her and sang to her in Spanish between trying to look into her eyes with his equipment.  This doctor is one of the kindest I have encountered in many years and I have unfortunately been to a LOT of them.  He determined she still had a mild infection and gave us antibiotic drop samples along with a prescription for it.

All is Good in the Eye Neighborhood

I treated Kairi’s eyes with the antibiotic drops to heal the remaining infection.  Over the past 4 months I have used the colloidal silver whenever her eye looks the least bit suspicious.  Knock on wood, everything has been good in the eye neighborhood.

This experience gave me a good first impression of the medical services in Costa Rica.  I continue to use natural treatments and hope we will not need to go visit the kind eye doctor again.

I took these pictures of Kairi right after breakfast, before combing her hair or anything, to show how great her eyes look now.

Our Medical Future in Costa Rica

Stay tuned for more medical stories.  Unfortunately, I have experienced the medical system in Costa Rica several times since our arrival just 4 short months ago.  I had to go to the ER after a serious fall that required X-rays and a visit with the ER doctor.  Then had additional X-rays and an ultrasound at local clinics along with treatments at a chiropractor.  The good news is, they were mostly good experiences. 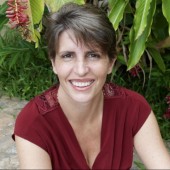 Kim ~The Veggie Gal~ is a wife and mother of 4 living a natural, plant-based vegan life in the tropics. She has learned how to feed her picky family a plant based diet while still keeping them happy and healthy. She loves to share her adventures and recipes.

How to Make Natural Toothpaste with Coconut Oil

Is The FLU Caused By Eating Animals?

How to Make a Flax Egg (a baking substitute)

You have Successfully Subscribed!